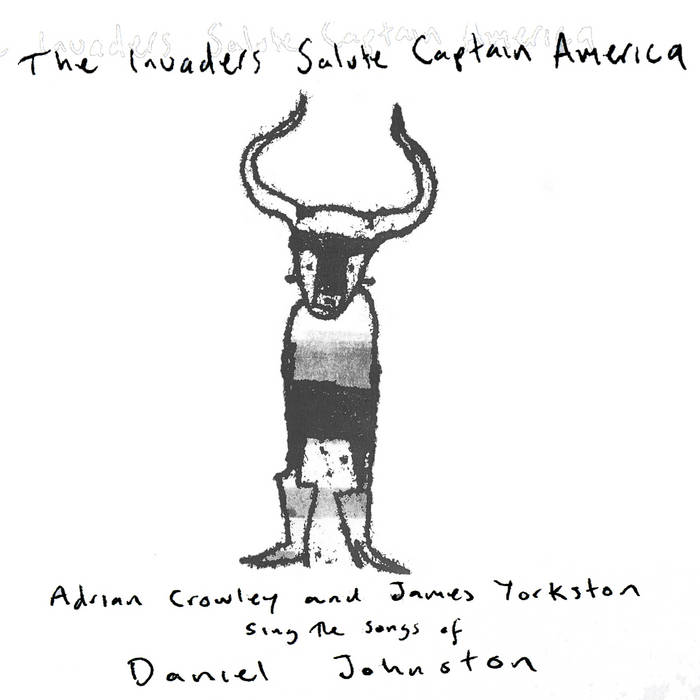 JY - Adrian and I recorded this album in Cellardyke and Dublin in 2008/9, sending each other musical scribblings via the internet, adding to and layering up arrangements. 99 copies of the finished beast were then printed up on CDr and sold at one of the almost-legendary Fence Records Homegames. A year or so later, the album was released again as a limited run of 1000 copies on Chemikal Underground Records, this time retitled ‘My Yoke Is Heavy: The Songs of Daniel Johnston’.

James and Adrian, interviewed in 2009

AC - Years back now. JY was playing in Dublin with his band and I had bought a ticket for the gig. On the day of the gig I got a call from the promoter who I knew pretty-well. The promoter asked me if I could lend an acoustic guitar for this gig he was promoting. He said the chap who was playing that night had a problem with his own guitar. So, I said, who and what is the gig? He said James Yorkston And The Athletes. He said ‘it’d be great if you could lend him an acoustic guitar if you have one. I can put you on the guest list … plus one’, he offered. I said, no problem, I have one all right but I haven’t played it a while. And no need to worry about the guest list. I was going anyway.

JY - Adrian rolled along with his Takemine and I borrowed that. It wasn’t a great guitar and it had much thinner strings than I was used to, but I was pleased to have it.

AC - I don’t think he enjoyed playing the guitar. Though I must say, it sounded great. The poor guy, the strings must have felt like train tracks – they hadn’t been changed in about three years and must have been covered in 100-year-old soot from my old carpet.

AC - Then later on that year, I had been added last minute to the bill of an Irish tour he and King Creosote were doing. I was totally disorganised and hadn’t arranged transport or accommodation. I remember walking into the venue in Belfast during sound check and everyone was like, ‘Who are you? Are you lost?’. I remember saying ‘I’m Adrian, remember? I’m going to be joining you on tour.’ This gruff guy was shaking his head saying, ‘No, no, there’s been a mistake, you should have stayed in Dublin!’ I was about to leave and walk back outside into the dark rainy night when the gruff guy (James) called me back and said ‘oh, aye, I remember now. By the end of the tour we were all like old buddies.

JY - We had no idea Adrian was going to be there so when he appeared in Belfast I was slightly taken aback. In my book (‘It’s Lovely to be Here – The Touring Diaries of a Scottish Gent’) I refer to this awkward moment as though it was very short and he was quickly and warmly invited into the fold, but a mutual friend told me that Adrian had said I’d been very rude to him. My memory isn’t the best, so the truth is probably nearer that latter. However, since then, Adrian and I have done a load of tours together, at least 4. We did a couple around Ireland with Alasdair Roberts. They were good fun, I remember them fondly.

AC - At the end of that first tour, just before saying goodbye, Kenny King Creosote told me about this festival he had started the year before and invited me over to Fife to play, the following spring. Anyway, I suppose that was the start of a lot of things. Over the years James and I talked about recording together. Actually, James came over to Dublin and played on Long Distance Swimmer several years ago, and I’ve contributed to some special edition releases of his since that time – like that version of his song Shipwreckers I did for the box set of When The Haar Rolls In. I love that song.

JY - Anyway, we recorded this Daniel Johnston album back in 2008-9, via the internet. I guess the nucleus of the idea came about when I asked Adrian to play with me at a tribute show to Daniel in London.

AC - It was to launch the documentary The Devil and Daniel Johnston. The Barbican put on this special show, and they asked a lot of people to play; Vic Chesnutt, Jason Pierce, Howe Gelb, Teenage Fanclub. James chose four or five songs, sent them to me and asked if I could join him. That’s how it began.

JY - Adrian is a fan of Daniel Johnston’s music, way more so than I, and I just thought he’d appreciate being asked. No one really knew of Adrian over here at that point – although he’s a star name now – so I probably thought it’d help him out in some way, too. The songs which I sang at Union Chapel were chosen by my then girlfriend, who is a massive fan of Daniel’s. And those were the songs I stayed with for this record. I think they’re kind of the obvious DJ songs. The hits. Daniel Johnston’s songs are simple and correct, like 1950s doo-wop songs, Sun-era Johnny Cash, or early Beatles — just great wee pop songs.

JY - I guess the other main Daniel Johnston thing I did was opening for him and then playing with him at Union Chapel. That show got turned into a DVD. It was pretty good fun, I recall, hanging out with Adem who is a very friendly, warm and open individual. Daniel was a cool enough guy too. He likes his comics, I mind that right enough.

AC - It didn’t take much really to come up with which songs to do. James already had chosen bunch to do live and I added more songs that I loved. I must add that I had never played any of Daniel’s songs before this. I sat down at a piano in my sister’s house and thought I’d give them a shot. I felt the songs resonate with me and I just let them do with me what they wanted. I think after years of listening to songs you love, been intermittently and tangentially, they embed themselves in your subconscious and then your own natural interpretation waits to be ignited.

AC - Neither of us slot into particular roles, but I think we might have a bit of both merriment and melancholy. Some of the songs that we chose, on the face of it, are upbeat – like Like a Monkey in the Zoo, or Walking the Cow – but they’ve all got that undertone of melancholy. Sometimes it’s even more striking when there’s an upbeat quality to it on first listen, and the words come through later; I think it can be even more affecting that way. I’m really moved by his songs, and that was one of the things I first noticed about them.

JY - One of us would begin a song, send it over to the other, who’d add parts, and back and forth, until finally, the song would be complete. Great fun. No pressure, no expectations.

AC - Both James and I were into the idea of home recording with the most basic of equipment. We didn’t use computers, just old tape machines and near archaic porta studios. All sorts of items were used to make a joyous racket. Kids toys, spurs, 1960’s tape recorder to garble the sound a bit here and there… The machine I was using mostly to record had a built in CD burner, so in order to mix down/ export any of my work, I had to burn a CD. There were loads of CDRs piled around my desk in the end with notes scrawled on them. I’m not sure if I sent some of these to James or not. I think I did.

JY - My tracks were based on the demos I’d made for Adro when I was doing that Barbican show and then we just sent Wav. files back and forth. We hadn’t rehearsed or anything and neither of us were taking it too seriously, just making a cheap but fun CD-r for the Fence Homegame thing. There was no brief I remember other than to make it as good as fuck and not worry too much in the process.

JY - Imagine if all recorded music was perfect? Auto-tuned to buggery? The magic is in the fluffs, the slight delay in striking a chord, the bending of a note. I think the most important thing when recording is having the right material, being comfortable in your surroundings and having the confidence to make those mistakes that give records character. There’s no way I would have re-recorded them. I’m not interested in polishing them up at all. Even if I had been, Daniel Johnston’s art and music is almost the definition of lo-fi, so it would have been wrong – we had to keep the grit and sand in the Vaseline.

AC - I had always loved using tape recorders, four track recorders, mini discs Dictaphones, mainly for rough work but now and then something about the sound would stay with me. A part of those recordings would make their way onto a record of mine. I’ve recorded pigeons taking flight and footsteps for songs of mine like From Champions Avenue To Misery Hill or the rustling of dried leaves for songs like Liberty Stream. I do like the atmosphere of sounds other that what comes from a conventional musical instrument. They trigger something in my mind, personally but can work in an ambient musical sense also.

AC - I think at some stage we tried to outdo each other with wacky, unconventional ideas, in terms of production. I’ve a little studio in my attic where I write and there’s a lot of gadgets around – even non-music related things. A lot of them ended up in the recording, and it was the same with him – there’s the sound of baby monitors and kids’ toys mixed into some of the songs.

JY - This album was originally made as a limited edition of 99, just for a Fence Records Homegame Festival. When Chemikal Underground asked if they could release it properly, I had to ask on the Fence Records Internet message board and someone sent one in. It was good to hear it again. I don’t really hoard my recordings, I’m happy for them to go their own places. I don’t know if Daniel Johnston has ever heard the album, and I’m not going to bother him with it. I’m not using it as a calling card to be his new number one buddy, or anything; it was just a bonny wee album we made... I guess some people will like it. I think it’s lo-fi and interesting enough not to annoy any Daniel Johnston purists, but the songs are accessible enough to ease any Daniel Johnston virgins into his songbook. I guess if it meant a few more people bought his records, that’d be a good thing. He’s written some great wee songs and deserves to be heard.

All music played, recorded and mixed by James Yorkston and Adrian Crowley. All songs by Daniel Johnston, with the exception of Some Things Last A Long Time which was written by Jad Fair and Daniel Johnston

This is the home of the limited run releases of James Yorkston, a low-rung sangster from the East Neuk o' Fife, Scotland. For James' official Domino Records releases, his books, live dates and such, please go here - www.jamesyorkston.co.uk/shop/

Bandcamp Daily  your guide to the world of Bandcamp